Anne graciously made it possible for Ella and Bunny to videotape the last 48 hours of Cassie’s life in a chocolate lab coat. The resulting movie has been shown during the live weekend SPIRITS in Transition seminars, allowing the participants to familiarize themselves with a natural dying process in a dog.

Thank you Cassie, Anne and Matt, for so generously sharing this amazing journey with so many!

Cassandra was a wonderful girl. We were together for 16 years. From the first time, I saw her , with the little red rickrack around her neck, when she sat down and waited to be picked up, I adored her. She was the girly-whirly, the looza-palooza, the brown houn(d) of renown, and what about a scarf for the arf… 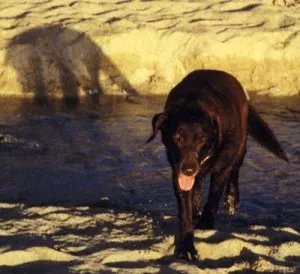 At first, the process of witnessing Cassie’s transition was much more difficult than I had thought it would be. Watching her gradually get weaker and refusing to eat was very hard. It helped me to know that she wasn’t in pain and that I could be with her all the way. Also, that she could die in peace at home with all her people around her and be in an environment that she knew and trusted. I also knew that if things changed and she was in extreme pain, that there was another option. Ella and Bunny were wonderful support and I really cherish all the help, love, and care they had for Poozie. I believed I was making the right choice but I still had a few misgivings.

The turning point, for me, came when Poozie had a dialogue with the dog(s) on the other side. After witnessing her communicating with them and seeing the peace that she felt after having had her questions answered reassured me immensely. It was so clear that she was having interludes of being in two worlds. She would bark her questions/concerns and get replies and then bark again and have that far-off gaze into the next world. Then she would come back to this side and be focused here. I was so relieved that she would be with others after her transition. It helped me let go of her spirit so that she could depart more easily. It was a blessing to have her transit so completely and be able to go so freely into the next world.